Can dataviz evoke empathy? Should it even? And if so how? First post in a series towards The Responsible Data Forum on the topic of Data Visualization, Jan 2016, NYC.

A set of beautiful data visualizations recently published in Popular Science commemorated the 70th anniversary of the Atom Bomb that wiped out Hiroshima and its inhabitants. The visually pleasing infographics generated a heated Twitter debate on the estheticization of this horror and the reduction of human crimes and tragedies to statistics and abstract graphics.

Um, data viz people? What are your thoughts on super pretty visualizations of Hiroshima for today's anniversary? -__-http://t.co/MGdznTXDfN

One late coming tweet from Alberto Cairo (author of The Functional Art and the upcoming The Truthful Art) particularly stuck with me:“I am just very skeptical to the idea that data visualization is a medium that can convey (or even care about conveying) or increase “empathy”.

Did we always know that about visualization but preferred not to talk about it? Does the mere sight of a chart simply shut us down to human empathy? Do these visual puzzles set our brains in a rational decoding mode, devoting all of its cycles to the evaluation of quantitative data in the expense of everything qualitative, like for instance, the human experience? Is that what we want?

I immediately looked up my favorite visualizations positioned at the center of human rights campaigns and meant to spring us into action. Most of them indeed jumped quickly over the human experience and right into the numbers that are somewhat removed and can be meticulously measured and objectively compared. It’s as if our human experience is set aside and the trust in numbers is framed as a single point of departure.

Empathy is defined as the capacity to understand or feel what another person is experiencing from within the other person’s frame of reference, i.e., the capacity to place oneself in another’s position. A lot has been said and written about how the number 6,000,000 is way beyond our human grasp and how a single child’s story like Anne Frank’s Diary can do so much more to convey the horrors of life and death under Nazi occupation. More recently it was not the statistics and charts that reframed the global debate about the Syrian refugee crisis. Rather it was the horrifying images of baby Aylan Kurdi’s body washed up to shore.

But is that a good thing? Some would argue that when we’re trying to make the best decision, we should actually detach empathy and other emotions, especially when it comes to public policy. It might even be considered irresponsible to foreground individual stories. In a personal conversation Alberto Cairo argued that “…By hiding faces, we reduce empathy, which might be actually good, as it lets us approach issues in a more dispassionate and neutral manner”. In the epilogue to his upcoming book, The Truthful Art (March 2016) Alberto quotes psychologist Paul Bloom who argues Against Empathy:

״…our public decisions will be fairer and more moral once we put empathy aside. Our policies are improved when we appreciate that a hundred deaths are worse than one, even if we know the name of the one, and when we acknowledge that the life of someone in a faraway country is worth as much as the life a neighbor, even if our emotions pull us in a different direction.״

Bloom goes on to differentiate between empathy and compassion, which he prefers. But how can the visual representation of data achieve a compassionate response? And could it do that without first evoking a certain level of empathy? And beyond that, wouldn’t a desensitized quantified view dehumanize these questions and prevent us from a deeper understanding of the human problems just because they cannot be framed numerically?

I would like to offer one case study that I believe strikes an interesting balance between quantitative and qualitative representation of life and death. I believe there’s a lot for us to learn from Periscopic’s gruesome yet subtle Gun Death visualization.

On a black background a thin gray axis is stretched between ages 0 and 108. A vital orange arc is then drawn from the 0 point. But before it reaches its peak the line is cut, revealing the label: “Alexander Lipkins, killed at 29”. The dot drops to the ground and is buried one pixel under the base-axis. The arc completes its contrasting ghostly gray course and reaches the base ground to reveal a second label: “could have lived to be 93”1. 4 more arcs are drawn in different curves and altitudes, each revealing the different projected lives and deaths arc of Bernard Gillis (killed at: 20 / could’ve lived to be: 84), Gerald Warren (35/91), Troy Anthony Martinez (21/87) Mark Manch (49/62). Now a torrent of arcs starts shooting and dropping quickly one by one soaking the base ground with the bullet-bodies of the victims and rapidly adding to the soaring body count and to the speculative amount of stolen years.

Here’s a video version of the full interactive piece that’s available at guns.periscopic.com:

This unusual build leaves us with a chart that reveals the shape created by the mass of aggregated arcs and allows to single different arcs by drilling-down to individual lines and explore the names and stories behind them. The arc mass can then be filtered and explored by gender, age, geography and time much like we have grown to expect from interactive exploratory data visualizations. Some insights are suggested by Periscopic in a manner quite similar to other explanatory analysis we’ve seen before.

In his book Thinking Fast and Slow behavioral economics pioneer Daniel Kahneman describes how our fast pattern-recognizing thinking (“system 1”) informs our slower deliberative and rational thought process (“system 2”). He also describes the process of framing in which previously defined context is relied upon in the interpretation of a message. This framing can often be deliberately constructed like in the case of Periscopic’s gun death visualization.

The empathetic and poetic framing of this chart is definitely the source of its power and effectiveness. The anthropomorphized arcs and dots are not anonymous and acknowledging the victims names makes them more than a statistic. The juxtaposition of life arcs prompts us to plot our own life arcs on the same continuum and imagine the rest of our lives or that of our loved ones. Will they be allowed to complete their arcs? Or could they fall victims with their remaining years stolen.

The age of death of this very unnatural cause is contextualized by the prospective years lost, bringing in a completely different dataset in a quite questionable speculative move. Yet how would you otherwise frame the years that these gun victims could’ve lived? How would you de-trivialize these untimely deaths? The transition from an abstract yet chilling and dramatic singular life-arc representation to a more common “big picture” chart view shows how empathy might be introduced back into data visualization, or rather how data can be introduced through an empathetic framing.

How do you see it? Does this framing wrongfully manipulate us into empathy, obscuring our judgement from making the right decision? Did Periscopic strike the right balance? Or did they cross the line? Should we stay firm in the against empathy camp? Or maybe today’s data visualizations more generally manipulate us into a distorted unempathetic perspective? Do we really have to defuse our empathy to support the right policies? Where should we draw the line?

Big thanks to Alberto Cairo for offering valuable input in the writing process.

Join the conversation below and on the #RDFviz hashtag on Twitter.

Connecting with the Dots
Jake Harris on data visualization, empathy, and representing people with dots

What If the Data Visualization Is Actually People?
Sarah Slobin discovers that all the facts and numbers didn’t add up to the humans in her story

Disinformation Visualization
Mushon Zer-Aviv on how to lie with DataViz

1 :For the gray lines, Periscopic used data from the World Health Organization. Find more about Periscopic’s methodology and finding on their post: Thoughts on Visualizing US Gun Murders. 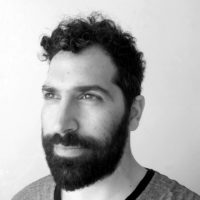 Mushon Zer-Aviv is a designer, an educator and a media activist based in Tel Aviv. His work and writing explore the boundaries of interface and the biases of techno-culture as they are redrawn through politics, design and networks. Among Mushon’s collaborations, he is the CO-founder of Shual.com – a foxy design studio; YouAreNotHere.org – a tour of Gaza through the streets of Tel Aviv; Kriegspiel – a computer game version of the Situationist Game of War; the Turing Normalizing Machine – exploring algorithmic prejudice; the AdNauseam extension – clicking ads so you don’t have to; and multiple government transparency and civic participation initiatives with the Public Knowledge Workshop; Mushon also designed the maps for Waze.com. Mushon is an alumni of Eyebeam – an art and technology center in New York. He teaches digital media as a senior faculty member at Shenkar School of Engineering and Design. Previously he taught new media research at NYU and Open Source design at Parsons the New School of Design and in Bezalel Academy of Art & Design. Read him at Mushon.comand follow him at @mushon.

NGOs embrace GDPR, but will it be used against them?