Datakind UK and Citizens Advice Bureau (a British organisation that gives advice to citizens about their rights) recently collaborated on a project to make better use of the CAB’s data, finding that:

Getting the most out of data without compromising confidentiality and privacy is tricky. It presents some genuinely difficult judgments as organisations weigh the risks and benefits, and is an area where society needs to catch up with changing technology.

They documented their approach to these responsible data issues as part of their report on the project, published by Nesta:

“Throughout the project we were acutely aware of the sensitive and personal nature of the data we were working with. We were often dealing with data about vulnerable individuals – whether that was sick children in the Shooting Star Chase data or homeless people in St Mungo’s Broadway’s case – the work required both an awareness of data protection laws, as well as an emotional sensitivity to the stories in the data.

“As organisations collect individual level data they ask people to complete a data consent form. The form outlines the specific uses to which personal information will be put, one of which is usually analysis
and service improvement. With St Mungo’s Broadway the implicit assumption is that the analysis they conduct using individual level data is done internally. This was the first time that they had interpreted
consent in a different way, and raises questions about the correct wording of consent for future projects.” 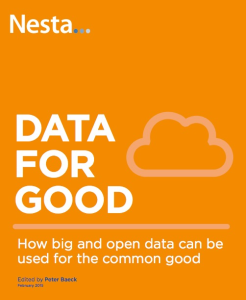